Posted on April 2, 2010 | Updated October 18, 2021 by Tracey Rickard
This entry was posted in Beyond the Code and tagged Design.

I have always been a Francophile completely immersed in the romance of it all. It was my dream for many years to live in France with the clichéd red wine, the French bread and the sunshine. Finally in 2005 we decided to sell up in the UK and buy a house in France.

We had enjoyed great holidays in the Dordogne and the Lot Valley so we headed there. On a beautiful summers day we headed up into the mountains near Figeac to view a completely decrepit but grand Quercy style Maison.  It had trees growing through the roof and woodworm like I have never seen but I fell in love, it was the one for me. I think my husband winced a bit at the thought of what was ahead of us but he went along with it. Situated on a hillside with amazing views it was idyllic and the 8 acres of land with our own wood and spring water source made a pretty wonderful package

Here it is in the original state, trees growing through the roof, unsafe structure and woodwork and lots of very out of control land.

We found a local artisan builder to complete the restoration – 360 metres of property over three floors. The lower floors had been where the animals originally lived and so that needed to be converted into living accommodation. The top floor was basically a huge loft with ceilings higher than most house.  That open space needed to be divided up into bedrooms and bathrooms.

On what was originally the main living floor there was a huge open kitchen with a fabulous open fireplace that you could stand up in, plus a traditional Souillade (scullery) with a huge archway. There were so many original features and bags of character so it was crying out to be restored. There were four other rooms off the kitchen: a large sitting room, large dining room, a utility room and a downstairs bathroom.

Our builder was very slow, it took nearly five years to get it to a habitable point and there were some very disappointing trips over to France in that time but it was well worth it in the end. He used traditional Quercy style tiles for the roof in a mosaic of colours. The floors were restored with Châtaigner (chestnut) planks, which would have been the original wood used. Beams were exposed in all areas, along with some very attractive brickwork. Any beams that needed to be replaced were reclaimed oak from an old church. The veranda was built entirely from reclaimed oak.

Naturally we kept all of the original features and character. We had to modernise but made sure we restored sympathetically, marrying the old with the new as seamlessly as possible.

The photos don’t really show how huge this was but there could easily have been a bedroom at the back and a kitchen living area at the front.  We had installed a bathroom and guests could have enjoyed the private space with its own entrance.  We didn’t really ever need it though, as we had plenty of space inside the main house.  Funny to think the pigs and cows lived in here once.

Party, party, party!  We had some great times in here.  It was done in the style of a typical French café bar and one of our friends actually bought us a proper fluorescent Heineken sign to put behind.  Sadly I don’t have a photo of that.  You can’t really tell from this image but there was plenty of floor space for dancing. 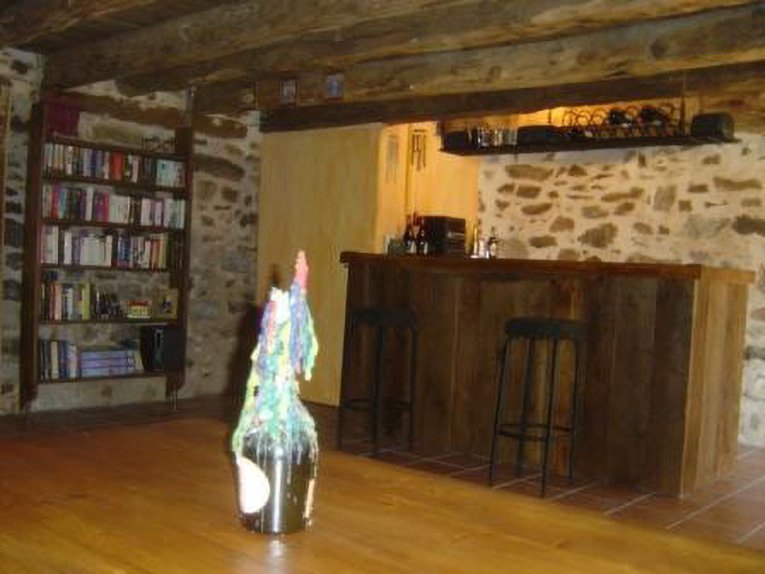 Through the beautiful stone archway is the original souillade and we fitted a whole kitchen into it.  There was no shortage of space but we decided to bring the large butchers block out into the main area to bring it all together. Plus we could cook and talk to everyone in the room at the same time. 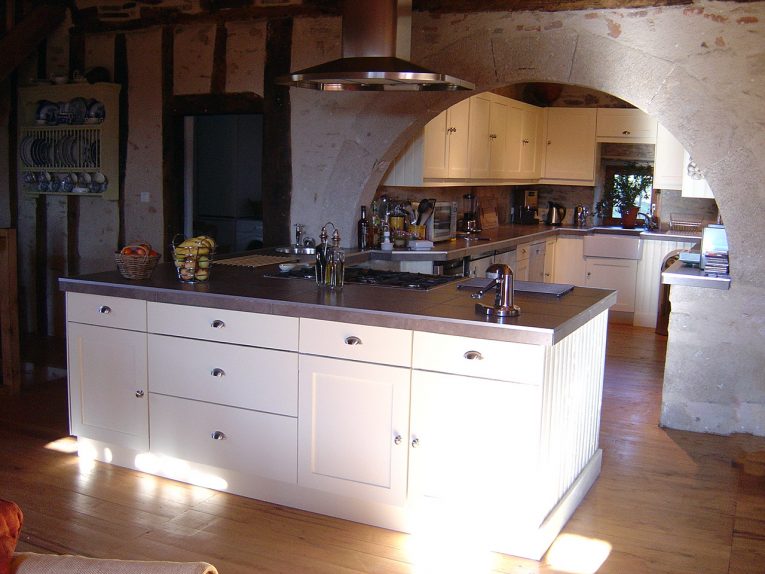 You can see the view out to the right from the butchers block here.  The bright and sunny yellow worked really well, the theme was sunflowers and the curtains were embroidered with a sunflower pattern.  It is hard to see the size from the photos but the original French oak farmhouse table was 3m long, so a huge room. 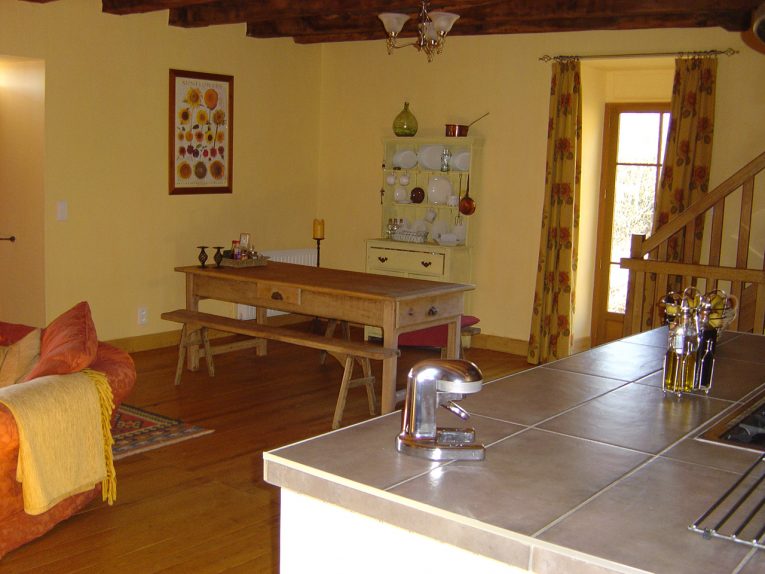 To the left of the butchers block was this fabulous fireplace.  You could stand up in it!  We spent many an evening in front of the wood burner here.  We decided on the wood burner over an open fire as it was safer and we could, to a certain extent, control the heat. 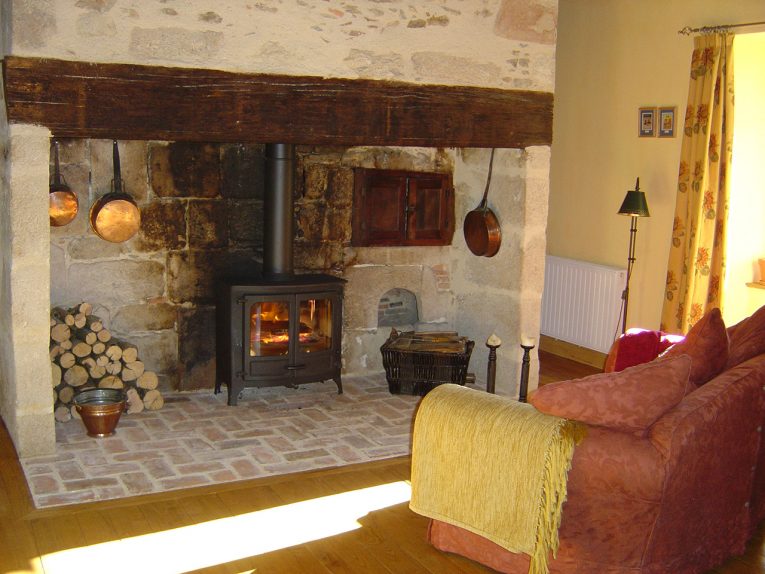 I saw a red dining room in Chelsea once and decided that one day I would have one.  The walls look a bit pink in this photo but they were in fact quite a deep red.   The colour looked fab with the old oak beams.  Such a great room but only used twice – once for a lavish Christmas Lunch followed by games.  We basically lived in the kitchen. 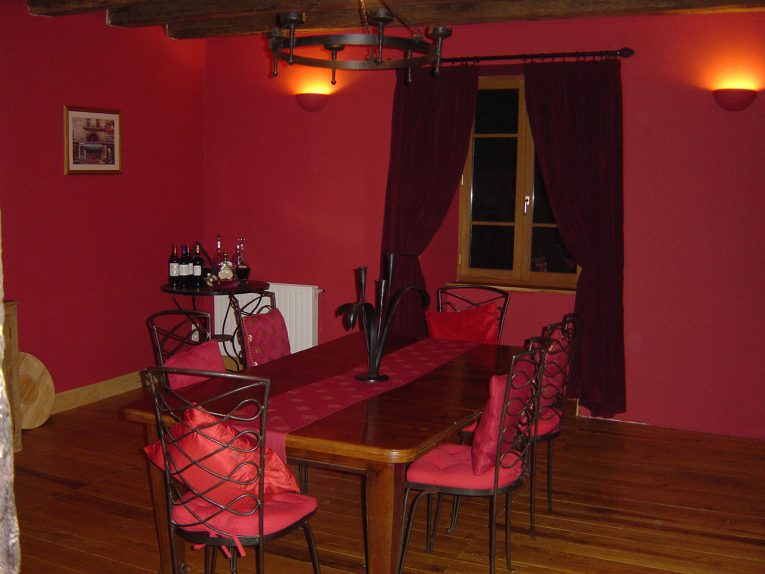 My favourite room, bright and airy and completely restful.  Both the sitting room and the dining room had the brick wall with the beams but it definitely had the biggest impact in this room.  Gold and cream is a colour scheme I have always liked. 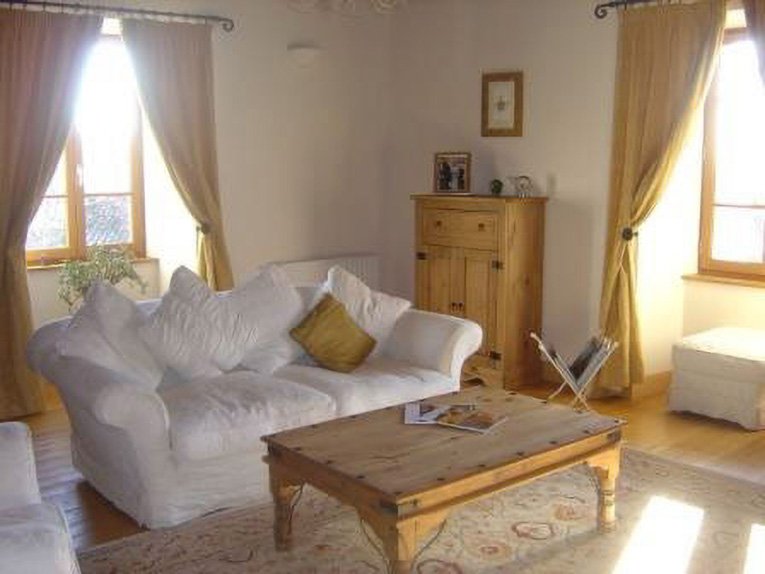 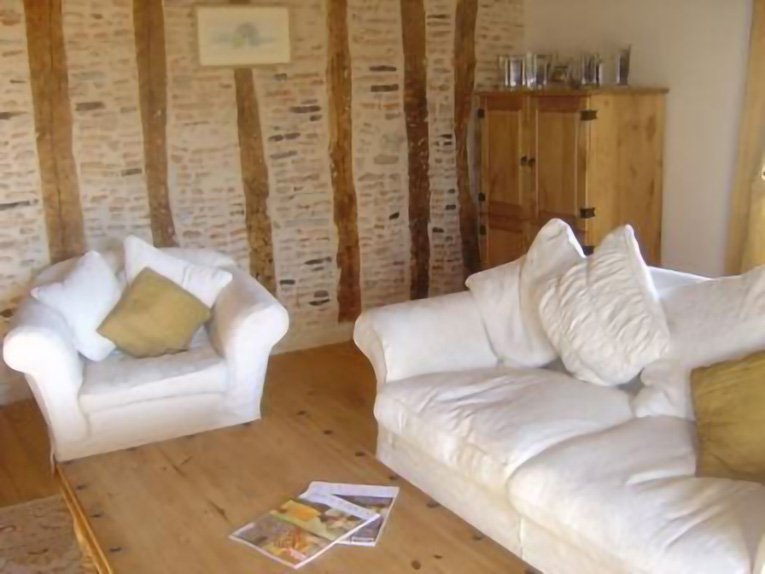 The original room beams were left and most of them were in good order, only a few repairs required.  The attic was bright and airy with plenty of space and very high ceilings at the apex. 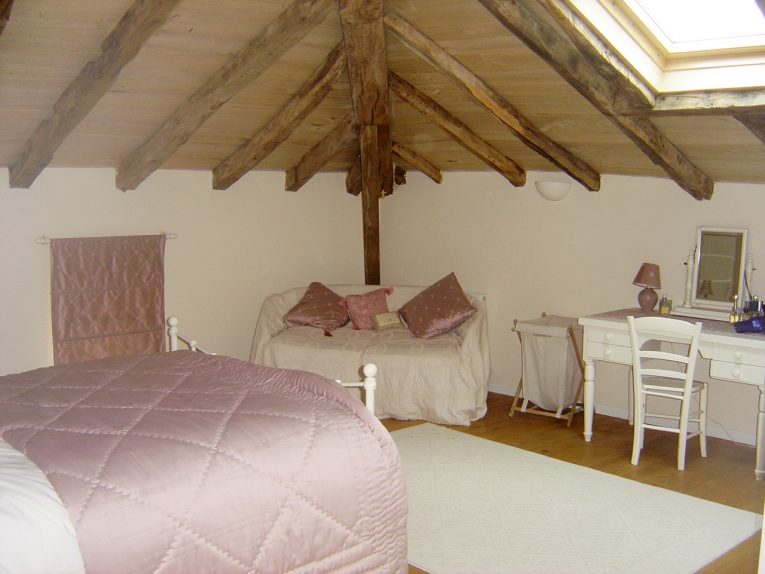 The cosiest bathroom every included a huge walk in shower and a sunken bath. 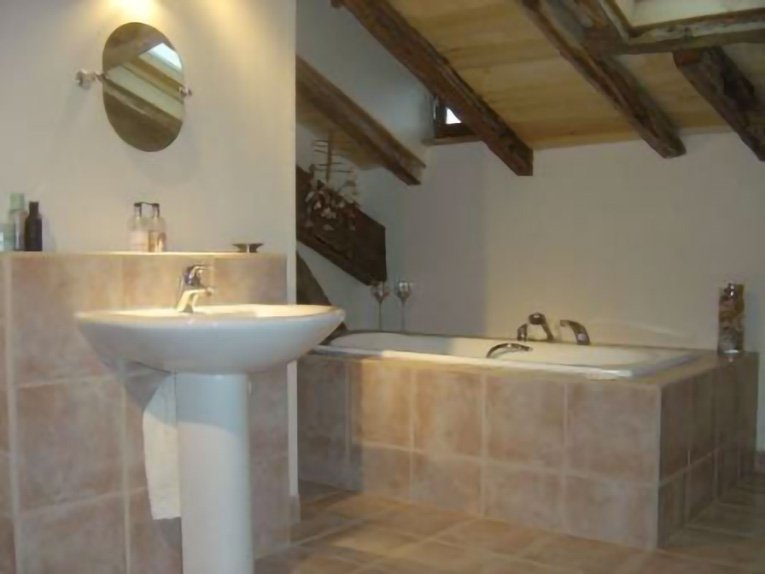 The traditional Maison with its signature veranda is restored.  It is actually listed in a book because it is such a good example of a Quercy style house.  Everything was done with reclaimed wood and the incredible stone steps up to the veranda on the left hand side are still the originals from when the property was first built, you can see them just below.

It was a huge job to do but what a great result.  I hope it survives the next 400 years and is loved by everyone who lives there. 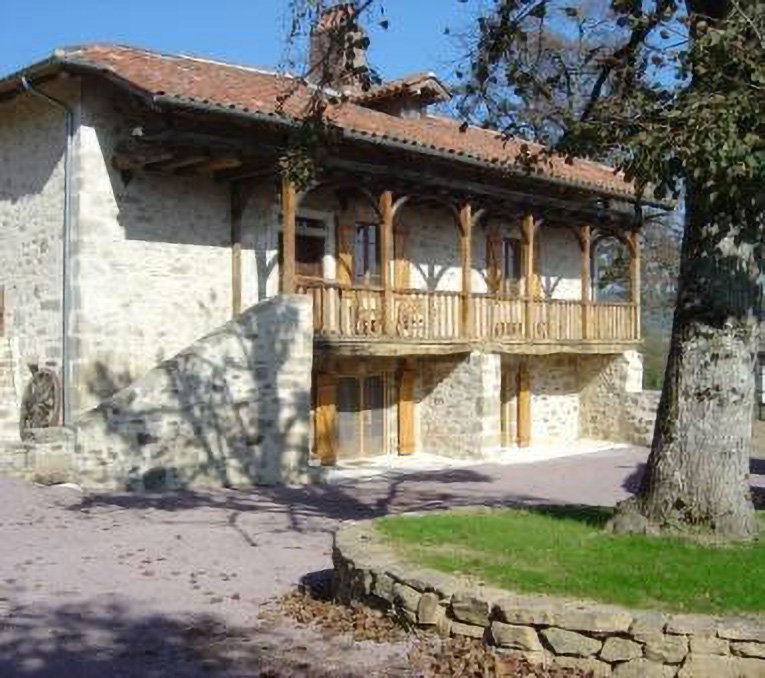 My husband did lots of work himself.  He built the kitchen and wardrobes.  He did all of the tiling including the huge bathrooms and added some great features like the wall around the tree.  He also created this whole area with a stone bench incorporating cleverly disguised drainage for this end of the house – a lot of hard work! 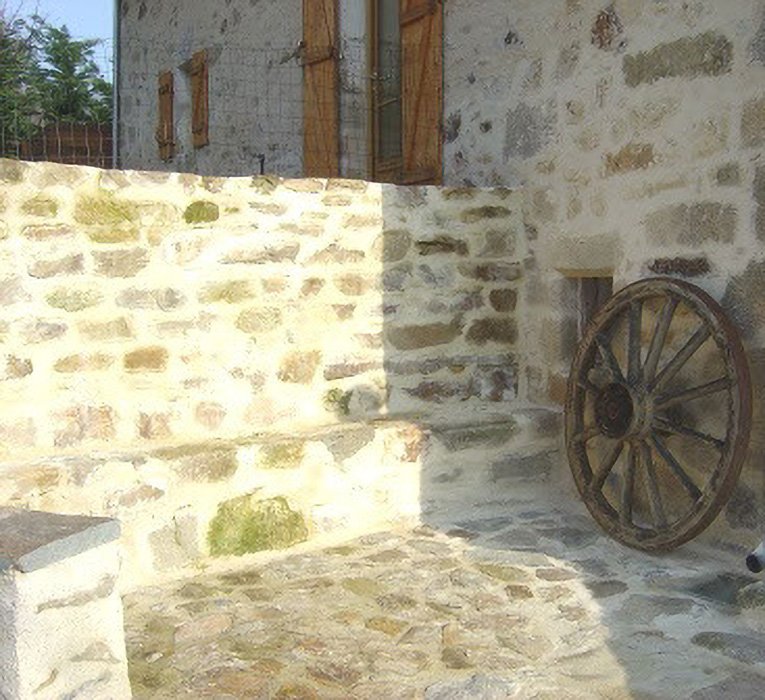 So that all done we were well on the road to our new, fabulous French life.  There were to be a few surprises along the way, we were in the hills ways above Figeac and at around 600m way above sea level.  What we didn’t bargain on were the winters, minus 18 degrees centigrade was not uncommon and the snow was deep.  Our pastures could easily have been a green ski run so we were pretty fortunate to have a Landrover – even that was pretty hairy at times on the narrow roads.  The high Volcan mountains were about 50 miles east of us, famous for Volvic water; there are 4 ski resorts in the Parc naturel régional des Volcans d’Auvergne.  We had fabulous open fires and were always really cosy though.

Summer could be really lovely and very hot, we enjoyed many a dinner on the patio late into the evening, some lovely dinner parties.  I thoroughly enjoyed cooking and people always seemed to enjoy the food, which was great.  I really got into it, making my own pizzas, cakes and pastry from scratch.  Cooking with the food of the area was a joy, lots of duck and plenty of fresh produce to enjoy.

The French markets are fabulous and we used to buy a lot from the supermarket but our greatest pleasure was to go down to Figeac on a Saturday morning and stock up on fresh fish, meat, fruit and vegetables.  It wasn’t just the food either, there were some great stalls selling crockery and artisan oils and spices.  The cheese stall was my absolute favourite and I fell in love with a cheese called Entre-Deux (literally translated to between the two), we brought some home once but it definitely did not taste the same in the UK as it did in France.

My favourite place in the area was Lac du Tolerme near Latronquiere.  We spent lots of time there walking and our Labrador, Jazz, learned to swim in the lake.  There was a great restaurant café there and we enjoyed many a lazy Sunday having lunch and a glass of red.

We had a great time and made good friends, it was all in all thoroughly enjoyable.  There were very few English people in our region and pretty much all of our friends and neighbours were French.  Everyone was so kind and helpful to us, were very lucky. We had some really good parties and found ourselves part of the local community with plenty of Friday nights laughing and dancing in our local bar.  I learned French too, I did online courses and of had plenty of real life experience.  By the time I returned to the UK I was quite proficient and still watch a French film from time to time.

We returned to the UK in 2008 because we found ourselves twiddling our thumbs and wanting to return to work.  I had found a new career in webdesign during our stay in France, I had built a few holiday property websites and I loved it. When I got back to the UK I did some degree level courses and kept going from there.  I will always look back on our time in France with fond memories and I am so glad I was able to live my dream.  Je ne regrette rien! 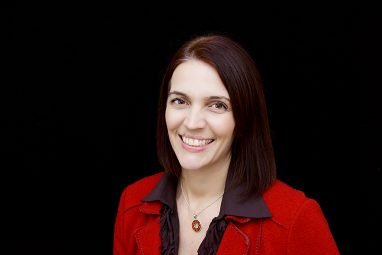 There’s More to Web Design than Code and SEO 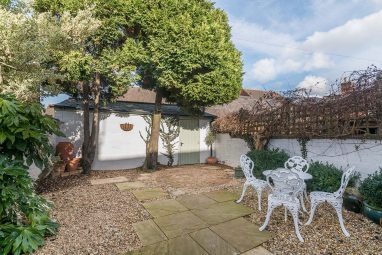 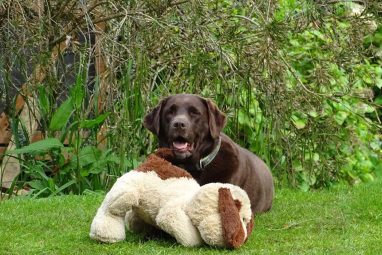